The Wonder of Chia Seeds

Chia seeds are one of these foods that, if you talk about them with other people, you'll inevitably get a blank stare back at you. That's fine because that gives you the chance to tell people about what is thought to be one of the healthiest foods you can eat. The name chia comes from the Aztec word for 'oily', which is 'chian', and this explains well what one of the main benefits of chia is; it is very high in omega-3 acids, which are a type of unsaturated fats.

It's easy to get mixed up between omega-3 and omega-6; basically, omega-3 acids are the fats which are not so easy to come by. They're in fish oils, flax seeds, kiwi seeds, and chia seeds, amongst other things. Omega-6, on the other hand, is found almost everywhere you look: nuts, vegetable oils, avocadoes, etc. As important as omega-6 oils are to our health, the balance of omega-3 to omega-6 is equally important. As it is so easy to consume plenty of omega-6, it is very easy to end up with an unbalanced consumption of the two types of oils, which are also known as essential oils. When it comes to the amount of omega-3 oil in various seed oils, the chia seed has the highest content, just above kiwi seeds, perilla and flax.

Most health conscious people will be more familiar with linseeds than they will be with chia seeds. So, if you've ever put a spoon of linseed into some water and left it for thirty minutes, you would have returned to find a kind of glutinous solution, kind of like a gel. Well, the same thing happens with chia seeds, which is another reason that they are so good for you; they act the same way in your gut. This means that they are really good for your digestive system, providing both a high amount of fiber, and also this action of forming a gel like solution moves through your body and cleans up as it goes. It's also thought that this gel physically prevents the fast breaking down of carbohydrates in the body, by slowing down the action of the enzymes on the carbs.

The chia seed was once a staple food of the Aztecs, loved for its ability to sustain and to give endurance. Actually, you could live off chia almost entirely, because it has 19 amino acids, with all of the essential amino acids except taurine. It also has more iron than spinach, more calcium than milk (not that milk is any good for us anyway) and even more antioxidants than blueberries.

So, how do you consume it? Well, you can grind it up into a meal called 'pinole' and add it to just about anything. In Mexico, they mix the whole chia seeds with water or fruit juice to make something they call 'chia fresca' which translates as 'fresh chia'. You can also sprout them in much the same way as you sprout alfalfa seeds and use them in salads.

This recipe is a great recipe to play with and make your own favorite. We love to vary the vegetables, the pasta shapes and the dressings to make a different dish every time we prepare it.

Directions:
Variations:
Posted by Veg4Health at 2:54 PM No comments:

Eat more fiber and you just may live longer.


CHICAGO – Eat more fiber and you just may live longer.

That’s the message from the largest study of its kind to find a link between high-fiber diets and lower risks of death not only from heart disease, but from infectious and respiratory illnesses as well.

The government study also ties fiber with a lower risk of cancer deaths in men, but not women, possibly because men are more likely to die from cancers related to diet, like cancers of the esophagus. And it finds the overall benefit to be strongest for diets high in fiber from grains.

Most Americans aren’t getting enough roughage in their diets. The average American eats only about 15 grams of fiber each day, much less than the current daily recommendation of 25 grams for women and 38 grams for men, or 14 grams per 1,000 calories. For example, a slice of whole wheat bread contains 2 to 4 grams of fiber.

In the new study, the people who met the guidelines were less likely to die during a nine-year follow-up period.

The men and women who ate the highest amount of fiber were 22 percent less likely to die from any cause compared to those who ate the lowest amount, said lead author Dr. Yikyung Park of the National Cancer Institute.

The study, appearing in Monday’s Archives of Internal Medicine, included more than 388,000 adults, ages 50 to 71, who participated in a diet and health study conducted by the National Institutes of Health and AARP.

They filled out a questionnaire in 1995 or 1996 about their eating habits. It asked them to estimate how often they ate 124 food items. After nine years, more than 31,000 of the participants had died. National records were used to find out who died and the cause of death.

The researchers took into account other risk factors including weight, education level, smoking and health status and still saw lower risks of death in people who ate more fiber.

“The results suggest that the benefits of dietary fiber go beyond heart health,” said Dr. Frank Hu of the Harvard School of Public Health, who wasn’t involved in the new research but co-authored an editorial in the journal.

The evidence for fiber’s benefits has been strongest in diabetes and heart disease, where it’s thought to improve cholesterol levels, blood pressure, inflammation and blood sugar levels. Fiber’s benefits also may come from its theorized ability to bind to toxins and move them out of the body quicker. High-fiber diets can promote weight loss by making people feel full, which has its own health-promoting effects.

However it works, fiber may offer a prevention benefit against killers like pneumonia and flu, the new study suggests. The cancer benefit may have shown up only in the men because they’re more likely than women to die from cancers related to diet, Park said.

Fiber is found in fruits, vegetables and beans. But fiber from grains was most strongly tied to the lowered risk in the study.

“That’s what seemed to be driving all these relationships,” said Lawrence de Koning of the Harvard School of Public Health, a co-author of the editorial.

Whole grains also contain vitamins and minerals, which may play a role in reducing risk, he said. For that reason, supplements may not be as effective.

“Nothing beats the original food,” he said. He suggested substituting whole wheat bread for white bread as a simple way to increase fiber from grains.

What does a high-fiber diet look like? A woman who wants to meet the 25 gram guidelines for daily fiber intake could eat one-third cup of bran cereal (9 grams), a half cup of cooked beans (10 grams), a small apple with skin (4 grams) and a half cup of mixed vegetables (4 grams).

Experts recommend adding fiber gradually to allow your digestive system time to get used to it.

Want to enjoy dessert for breakfast without any guilt?  Then these waffles are for you.  YUMMY!
Ingredients:

Posted by Veg4Health at 3:58 PM No comments:

This easy to prepare Mediterranean-style salad complements almost any meal and with tomatoes in abundant supply right now, it makes it even tastier. Click here for the recipe.

Posted by Veg4Health at 6:06 PM No comments:

If any of you are on Twitter, I'm still trying to figure it all out. Follow me at twitter.com/Veg4Health .
Posted by Veg4Health at 9:55 PM No comments:

Can Obesity Steal Your Smarts?

Older women hoping to keep their minds young should keep an eye on the scale—researchers have found a link between slowing down mentally and piling on the pounds.

For every extra point gained on a scale of obesity, scores in reasoning, memory and other mental skills fell, Dr. Diana Kerwin of Northwestern University in Chicago and colleagues found.

"What we found is that actually obesity in and of itself is an independent risk factor for declining cognitive performance," Kerwin said in a telephone interview.

She used data from the Women's Health Initiative, an ongoing national study of illness and death among older American women. She compared women's body mass index, or BMI, a measure of obesity commonly used by doctors and researchers, to their results on a test that measured their mental sharpness.

The test evaluated the memory, abstract reasoning, writing, and temporal and spatial orientation skills of the group of women ages 65 to 79. Among the 8,745 post-menopausal women who completed the test, for each point increase in the BMI scale, scores on the mental test went down by one point, Kerwin's team reported in the Journal of the American Geriatric Society. Read more here.
Posted by Veg4Health at 5:33 AM No comments: 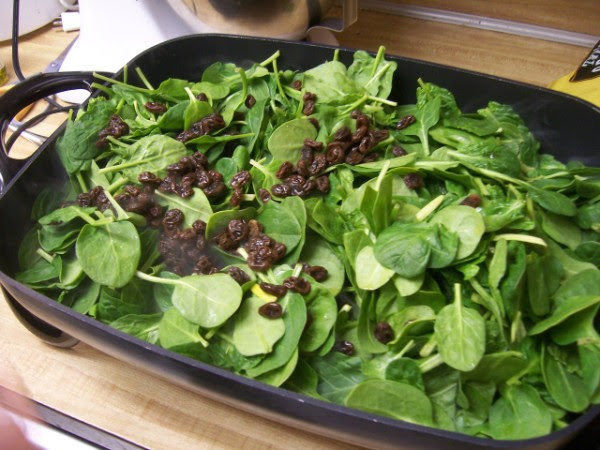 Step by Step Spinach with Raisins and Pinenuts
Click here for my latest Step by Step Recipes!

Click here to discover how to eat healthy without spending more time in your kitchen or money on your food budget!

Veg4Health
Florida, United States
Nancy Walker is a published author, freelance writer, motivational speaker, life-style coach and health educator. Nancy has been a total vegetarian for over 7 years, is happily married for 28 years and a homeschooling mother to two beautiful young children, age 9 and 11. Nancy is also an accomplished vegetarian cook and teaches others through classes, seminars, personal instruction and videos how to prepare healthy, easy and tasty meals. As a former owner of a large retail and wholesale produce business, she is very familiar with all aspects of produce including cultivation, selection, marketing and preparation. Nancy also loves to bicycle, speed walk, weight lift and run. Nancy’s personal dedication to health and wellness springs from her long family history of heart disease and diabetes. She saw first-hand how these chronic diseases stole her parent’s vitality, happiness, quality of life, finances and future. After her mother passed away from diabetes and all its complications, Nancy has been committed to her own personal health and that of her family’s. Her articles, recipes, menus and newsletter can be found at her website http://Veg4Health.com.

Watch my library of Podcasts grow at Veg4Health.libsyn.com